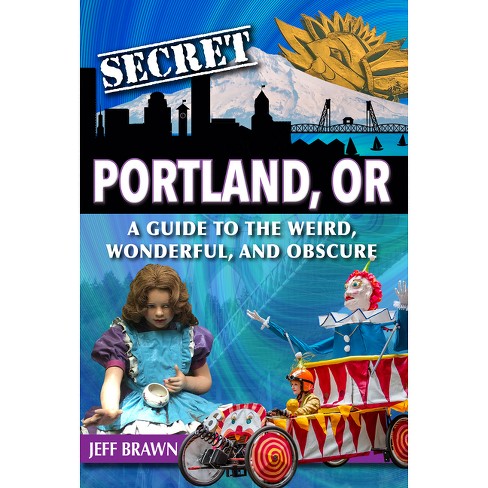 Secret Portland: A Guide to the Weird, Wonderful, and Obscure

Interview with me, conducted by a guy waiting with me at a Portland streetcar stop:

Interviewer: So tell me, Jeff—who is the target audience for this book. Who would be most interested in it?

Jeff: I’d be lying if I didn’t say that every single person on the planet should read this book. And in fact, off planet as well. Those space station guys? They should be reading it. It’s light reading here, but I’m told even lighter reading up there. Everyone can use this book. Happy, sad, young, old… People on their death bed should be reading it. It will cheer them up or I’ll give them their money back.

Interviewer What about an Indigenous tribesman from the Amazon rainforest, who has no money and has never heard of Portland?

Jeff: Don’t be ridiculous. Of course he would enjoy my book. What does he have worth trading? I’ll send him a coupon.

Interviewer: Okay then, tell me--

Jeff: Wait a minute, Reggie. Can I call you Reggie?

Interviewer: My name is Brian.

Jeff: That didn’t answer my question, Reg. But I did think of some people who should not have my book. Babies. Anyone under three, really.

Jeff: Exactly. But everyone else. And I want everyone, even babies, to see the movie when it comes out.

Interviewer: You see this as being adapted into a movie? Who would play you?

Jeff: I see a very young Ed Asner or a very old Halle Berry. Portland itself should be played by a middle school Tom Waites.

Interviewer: Obviously. Let’s talk about the book a bit.

Jeff: It’s all in the title, isn’t it? It’s all about strange and/or interesting places in or pretty damn close to Portland. Things that aren’t included in your standard travel book. Things I’ve learned since living here that I’m certain many locals don’t even know. Some they will, obviously. I’m not a mind reader, Reggie. I’ve tried to include something for everyone. If you’re not from Portland, you will be fascinated by all of it. If you’re a native Portlander, you will be raging mad at what I’ve included and/or left out. I’ll have gotten some of it wrong and they’ll have so much fun wishing my death on social media. I’m really looking looking forward to all the responses and awards.

Interviewer: Are you from Portland yourself?

Jeff: No. Born and raised in the Amazon Rainforest. Just kidding, Reg. No, I grew up in the Chicago and St. Louis areas.

Interviewer: And how did you decide you were qualified to write this book then?

Jeff: Oh, it turns out anyone can write a book. I checked on that. But actually, a native Portlander couldn’t have written this book. They don’t know what people don’t know. And they don’t know what’s strange or fun to hear about, because it’s just their environment you see? It’s like asking a fish to describe water. What does he have to compare it to? And also, you’re wasting your time asking a fish any questions at all.

Interviewer: Are you a professional writer?

Jeff: Well, I’ve already sold a book (thanks wife!), so officially yes. But only recently.

Interviewer: And before? What did you do for a living?

Jeff: I’m an artist—an illustrator. Of course, art doesn’t pay great either, so I’ve had many jobs to make ends meet.

Jeff: Rat catcher. Pay was horrible, so I won’t be doing that again.

Jeff: Not many. They like to hide and I’m very nearsighted. That’s why the pay was so miserable. They pay you by the rat.

Interviewer: Our ride is pulling up and I don’t plan on sitting next to you. Quickly, where can people find your book?

Jeff: It’s in all the places you’d expect to find books. Book stores. Amazon. Not the Amazon rainforest, although I haven’t checked, but Amazon.com. Barnes and Noble. You can go to my website, jeffbrawn.com and I’ll sell you one at a discount. If you live in Portland, I’ll throw in a free print and a sticker. I’ll do whatever I have to do to move this book—as long as I don’t have to take off my shirt. I’ll never get all those pictures off the internet…